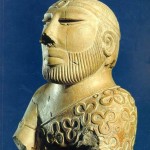 The Indus valley civilization (also known as Harappan Civilization) was part of Bronze age (and beginning of Iron age too) and flourished between 3300–1300 BCE (BCE means Before Common Era and is same as BC/Before Christ) along the basin of Indus River. It is one of the biggest Ancient Civilizations known today.

The Indus Valley is one of the world’s earliest and biggest urban civilizations, along with its contemporaries, Mesopotamia and Ancient Egypt. At its peak, the Indus Civilization may have had a population of well over five million.

Discovery: The ruins of Harrappa were first described in 1842 by Charles Masson in his Narrative of Various Journeys in Balochistan, Afghanistan, and the Punjab, where locals talked of an ancient city.  In 1872–75 Alexander Cunningham published the first Harappan seal and about half a century later in 1912, some more Harappan seals were discovered by J. Fleet, prompting an excavation campaign under Sir John Hubert Marshall in 1921–22 and resulting in the discovery of the civilization at Harappa by Sir John Marshall, Rai Bahadur Daya Ram Sahni and Madho Sarup Vats, and at Mohenjo-daro by Rakhal Das Banerjee, E. J. H. MacKay, and Sir John Marshall. Since city of Harappa was discovered first of all the Indus Valley Civilizations (IVC) , it is often called as Harappan Civilization. There were earlier and later cultures, often called Early Harappan and Late Harappan, in the same area of the Harappan Civilization. The Harappan civilisation is sometimes called the Mature Harappan culture to distinguish it from these cultures. Up to 1999, over 1,056 cities and settlements have been found, out of which 96 have been excavated.

Below is a table with chronological sequence of IVC ages (Courtsey: Wikipedia) :

First we need to understand that the Indus Valley Civilization is collection of all the civilizations that existed along Indus river and Ravi river. So do not confuse this with one city spread over thousands of miles. There were many cities like Harappa, Mohenjo Daro, Rupar, Lothal etc which were spread along the basin of the river Indus but were very similar when it came to planning, architecture, language , agriculture, trade etc. Collectively we call them Indus Valley Civilization. It was very similar to the other major civilizations that existed and flourished that time in other parts of the world like  Egypt and Peru. The Indus Valley Civilization encompassed most of Pakistan and parts of northwestern India, Afghanistan and Iran, extending from Balochistan in the west to Uttar Pradesh in the east, northeastern Afghanistan to the north and Maharashtra to the south. Lately, some isolated colonies have been found in Pakistan’s Frontier province and as far as  Turkmenistan and Gujarat.

By 2600 BCE, the Early Harappan small communities had been turned into large urban centers which we can call cities. If we collectively see the geographical area, population , number of cities and similarity with each other of the Indus valley civilization we could have called it an Empire, but we have no evidence if they were being ruled by an Emperor or anything similar. Anyway, archaeologists have excavated over 100 cities by now in today’s India, Pakistan and Afghanistan . Some of them are below:

We will discuss some of them in little more detail later.

There is no proof found that there existed a central ruling authority like king or emperor for any of these civilizations. We know this since no big forts or templates have been found. Also, there are no evidences that they followed orders from someone.

However similarity in architecture , culture and other social similarities suggest that there was a central administration which used to take care of these decisions and their implementation. We also know that everyone enjoyed equal status.

Looking at the well planned artchitcture and execution, archeologists have concluded that the engineers or the planners learned the art somewhere else and executed with these cities, otherwise building the whole city with such skill and planning would not have been possible.

One thing worth mentioning is that cities have been built on top of each other. Apparently, when a city was ruined, flooded or destroyed , new city was built on top of it. But the excavations have discovered that the bottom most architecture was most skillful and well executed. Reasons for this could be the initial knowledge was not well transitioned to next generations , the planning and execution people became less effective or less interested. But for what its worth, all the cities were still masterpieces for the period (they are still masterpieces in my opinion !!!)

Homes :  Homes were mostly one or two stories high, made of well baked solid bricks(in fact, lot of those bricks were used by villages in Pakistan to construct their homes before the sites were preserved ) and they all followed same design and architecture. This suggests that cities were completely built before people started to live there. Where did they live before their homes were constructed then? May be they were traders or settled from some other place, but we do not know for sure. Archaeologists are still trying to find answers to many similar questions. 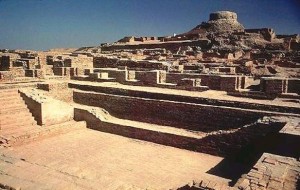 Back to the architecture, the houses had their own courtyard , a window opening into the courtyard(to see the kids playing :)) a personal drinking well and a bathroom. No windows or doors opened on the main street, but only to inner lanes.

Drainage system and Hygiene and Public facilities in Indus Valley

If you did not already know and some one describes you the sophisticated and technologically advanced urban culture that existed back then in IVC, you would never believe that it was an ancient civilization. The quality of municipal town planning suggests the knowledge of urban planning and efficient municipal governments which placed a high priority on hygiene, or, may be, accessibility to the means of religious ritual.

The homes had clay pipes from the bathrooms to the covered sewers down the street. These sewers were connected through piper running along the streets with the main sewer system , which drained into nearby rivers and streams. Archaeologists have also found massive bathing structures with small rooms alongside. Scholars believe that these might have been large swimming pools with changing rooms or perhaps these were used for religious ceremonies or rituals. One such structure found in the city of Mohenjo Daro is known as the ‘Great Bath‘. You can see its ruins in the picture above. 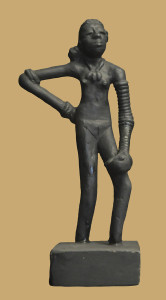 Excavations have revealed usage of metals and ceramic during that time for making tools, pottery, ornaments, beads and statues. Various sculptures, seals, pottery, gold jewelry, and anatomically detailed figurines in terracotta, bronze, and steatite have also been found.

Dance: Presence of the statue of a dancing girl reveals that people were aware of some form of dancing, liked to watch dancing or practiced it. Dancing could have been a source of entertainment too, but we are not sure as of now.

Jewelry & Ornaments:  Various metal ornaments like bronze and gold ornaments have been excavated. This reveals few things like people were fond of Jewelry and they wore it and that they had skills of making jewelry. Apart from metal, necklaces, bangles,ornaments and other crafts were made of beads, ceramacis , horns etc. Similar jewelry and ornaments are still used in some parts of India and Pakistan today. 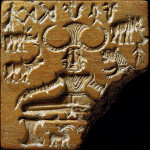 Seals and Pottery :  Many seals and ceramic potteries have been excavated from various sites.  We do not know exactly what they were used for , but they been helping archaeologists learn more about symbols, culture and language.

One of the seals found resembles figure of Lord Shiva (भगवान शिव) and has been named as Pashupati (पशुपति ) which is another name of Lord Shiva. 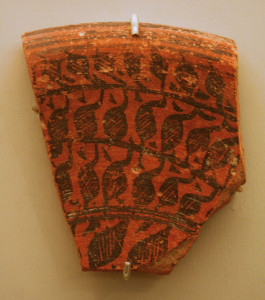 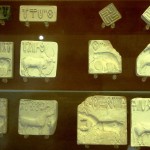 Pottery:  Indus valley people also had knowledge of ceramic pottery which is revealed by one of the broken pieces of pottery found during excavations. 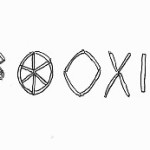 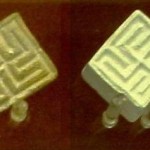 Although archaeologists and historians are trying hard to decipher the language and symbols used, but there has not been much success as of now.  However we have some idea that all the civilizations in the Indus Valley used same languages and signs. On the right is a seal excavated from Indus Valley which has Swastik (स्वास्तिक ) Symbol engraved on it. Swastik symbol is one of major symbols used in Hindu and Jain Religions. Archaeologists or Historians have found no proof confirming, but the symbols and pictures found from all over the excavations lead us to believe that Hindu or Jain Religion was followed that time.  We have some references to a similar city like Harappa in Hindu Veda Rigveda although there was a time difference of almost a 1000 years. We will discuss this later.

The Indus Valley Civilizations seem to be heavily dependent upon Trade with other civilizations which existed that time like  Mesopotamia , Persia and possibly Egypt.

All the long route trade was made possible by advances in the transportation technology at that time. Indus valley civilization might be the first one to use wheeled transport and bullock carts. Small boats and larger ships were used for sea route trade. There are evidences of large sea harbors and canals in Lothal(in Gujrat, India now) which were possibly used for docking these boats and ships and for loading/unloading goods. We have been able to relate trade relations between different civilizations due to similarity in goods found at all those places.

Evidences from excavations suggest that people knew farming and they grew crops. Domestic Wheat and Barley were major crops which were grown and consumed. Crops might also have been used for trade , but we can not say for sure.

Weights and Measurement: The people of the Indus Civilization achieved great accuracy in measuring length, mass, and time. They were among the first to develop a system of uniform weights and measures. A comparison of available objects indicates large scale variation across the Indus Civilizations. Their smallest division, which is marked on an ivory scale found in Lothal, was approximately 1.704 mm, the smallest division ever recorded on a scale of the Bronze Age. Harappan engineers followed the decimal division of measurement for all practical purposes, including the measurement of mass as revealed by their hexahedron weights.

Metallurgy : Harappans evolved some new techniques in metallurgy and produced copper, bronze, lead, and tin. The engineering skill of the Harappans was remarkable, especially in building docks.

A touchstone bearing gold streaks was found in Banawali, which was probably used for testing the purity of gold (such a technique is still used in some parts of India)

Dentistry : In 2001, archaeologists studying the remains of two men from Mehrgarh, Pakistan, made the discovery that the people of the Indus Valley Civilization, from the early Harappan periods, had knowledge of proto-dentistry. Later, in April 2006, it was announced in the scientific journal Nature that the oldest (and first early Neolithic) evidence for the drilling of human teeth in vivo (i.e., in a living person) was found in Mehrgarh.

Many scholars have argued that the site of Harappa can possibly be associated with a reference in the Rg Veda(VI.27.4-8) to a place called Hariyupia . In this Vedic reference, there is a description of a battle between two forces, one led by Abhyavartin, son of Chayamana (Puru clan) and the other by Turuvasa (Turuvasa Clan),  leader of the Vrichivat, seed of Varasika.
In the Rig Veda historic river Saraswati is also mentioned which could have been another name or tributary to Indus river.